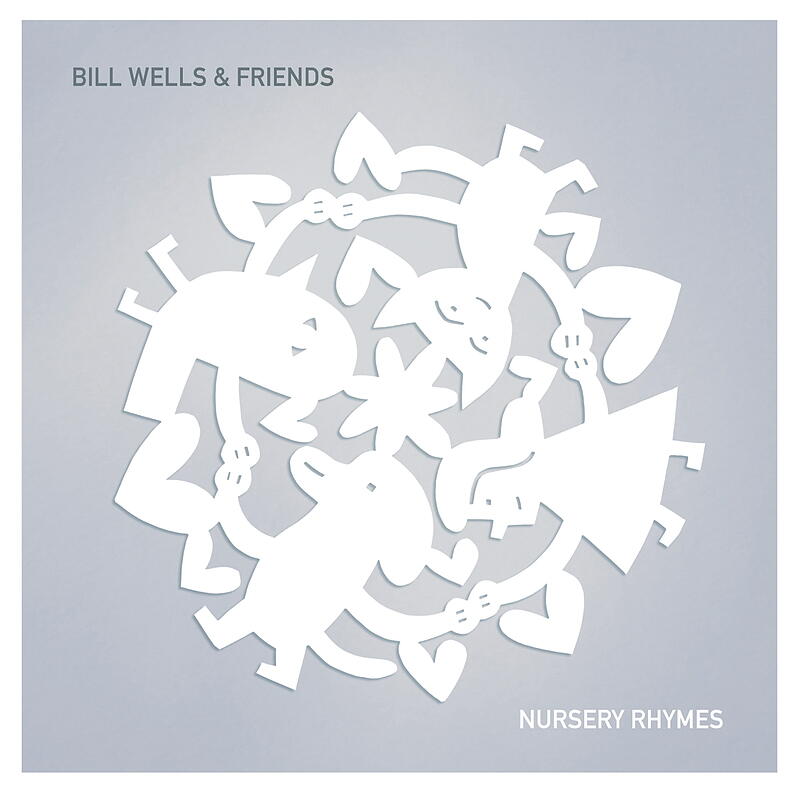 "If people thought it was a bit strange, then they didn’t say" says Bill Wells of the stellar cast of collaborators who played and sung on his new album, Nursery Rhymes. "I made it all clear pretty early on in proceedings and everyone seemed up for it."

Well, actually, it is a bit strange, but then think of Wells’ trademark combination of spare, melodic compositions with adventurous arrangements for the National Jazz Trio Of Scotland, particularly his adaptions of Christmas songs on their Christmas Album – and he’s a perfect fit for the job. In fact, it works precisely because it’s such an unusual undertaking, although the material provided common ground for the 18 musicians on the album. The songs are like musical archetypes embedded in the mind from the playground, but listening to the album you soon forget that context, as it reveals itself as a series of odd, cryptic and disquieting tunes.

Aby Vulliamy, vocalist with NJTOS, had suggested the idea to Wells, but he was initially unsure as to how it would work. "No one’s going to say that ‘Humpty Dumpty’ or ‘Three Blind Mice’ is one of their favourite tunes" he laughs. "But if I could do something that made me like the end result, then it was justified."

After winning the inaugural Scottish Album Of The Year award for Everything’s Getting Older, which he made with former Arab Strap vocalist Aidan Moffat in 2012, Wells secured some funding from Creative Scotland to go make an album in New York City with a musician he had long admired, Karen Mantler, the vocalist, multi-instrumentalist and band leader – and daughter of innovative jazz musicians Carla Bley and Mike Mantler.

Wells made an initial visit in early 2014 to meet Mantler, find a recording studio and to start recruiting musicians. He was able to fund Aby to come over to sing and play viola on the album, but in the spirit of the commission decided that he would otherwise only record musicians who were in or around New York. Mantler suggested bringing in vocalists Syd Straw and Amy Allison, and Wells asked long time collaborator Norman Blake of Teenage Fanclub, now based in Canada, to produce the album. Vocalist Isobel Campbell happened, coincidentally, to be in the area at the time. He also invited Yo La Tengo, and Satomi Matsuzaki and Greg Saunier from Deerhoof, who play individually and collectively on a number of tracks.

In August 2014 sessions began with Wells recording his piano parts to a click track to give a basic structure. "I’ve learned from experience that it’s often good to leave things fairly open" he says. "Sometimes people will collaborate with other musicians and won’t really let them do what they do best."

Yo La Tengo’s involvement was complicated by the fact that Wells arrived at guitarist Ira Kaplan and drummer Georgia Hubley’s apartment with some demos that Kaplan was unable to open on his computer. "I was talking about different styles and he looked a little concerned" Wells recalls. "And then he said this, and it was such a great and appropriate line for any collaboration that it has stayed with me ever since: ‘Please don't underestimate what we can't do’."

As it turns out, they made a considerable contribution and Wells enthuses about every one of the musicians and singers who gave their own particular stamp to this collection of songs. He gives a special mention to legendary vocalist and composer Annette Peacock; violinist Charlie Burnham who has played with Cassandra Wilson and James Blood Ulmer; singer and Tony-winning actor Michael Cerveris; and Amber Papini from the band Hospitality. "I was delighted that she was involved" he says. "Someone new and of a different generation."

He was also pleased to get the participation of Bridget St John, the English singer/songwriter who has been a long time resident of New York. When Wells was initially working on "Ding Dong Bell", he could hear her voice singing it in his mind. "She sings it with conviction" he says. "And after she recorded it she said, ‘That’s the child who tortures animals and grows up to be a serial killer’."

Nursery Rhymes is a unique record in that it recasts these funny, violent, coded, centuries-old sentiments as fresh, new creations. Wells is a brilliant arranger and does wonders in finding new ways of looking at the songs, and drawing more out of their strong but spare melodic material. And he positively relishes the juxtaposition of a simple tune with dark lyrics.

"They should be quite disturbing" he observes. "Because ultimately part of the remit of a nursery rhyme was to give your child some of the harsh realties of life, while sugar-coating them with a catchy little melody. But I’m losing that coating and going straight to the nub of the thing."